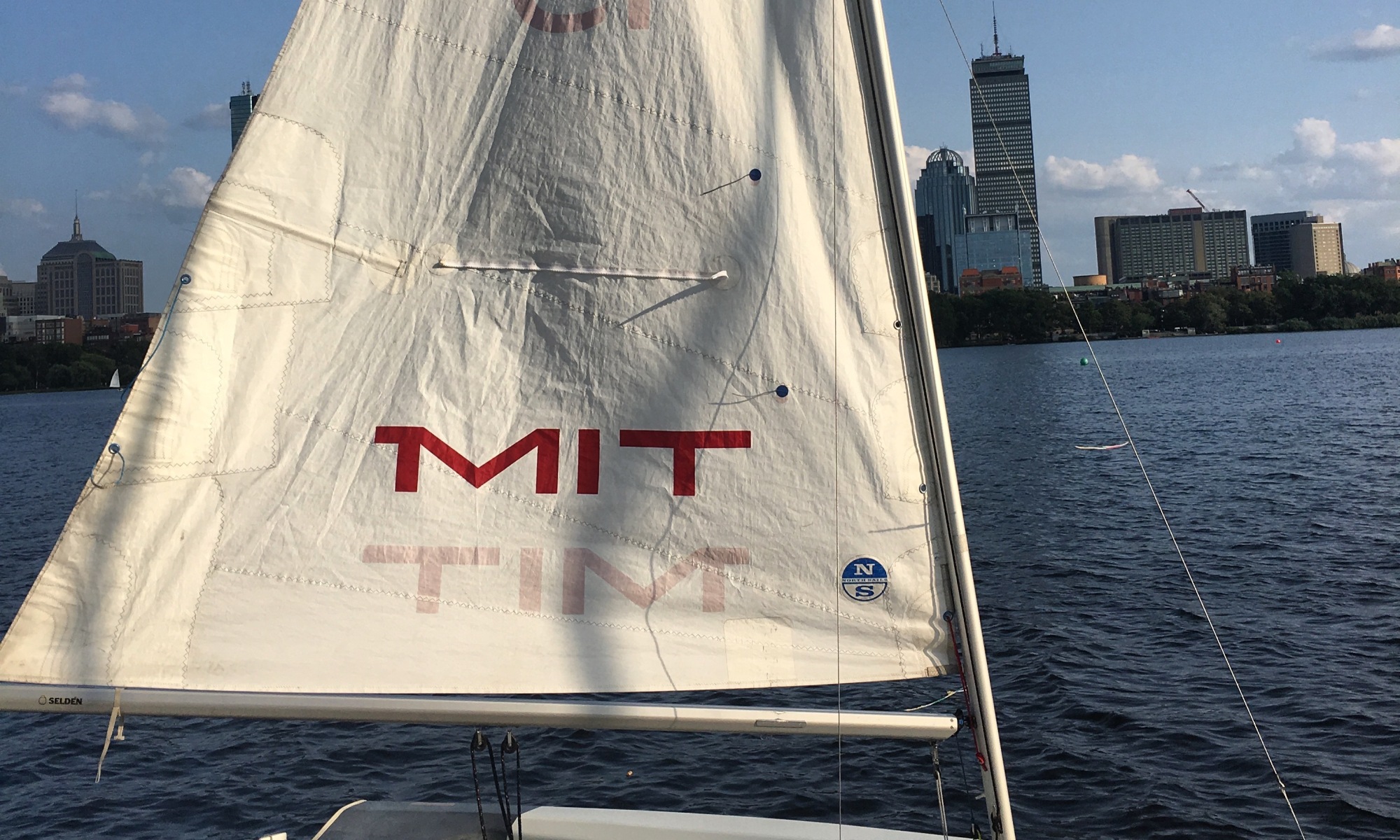 Following our visit to Salem, the fellows had enjoyed a week “off” before we reunited for a three-day audio storytelling class. For most of us, the open days gave us time to take care of personal business — registering cars, unpacking apartments, etc. It also meant free time, which I used to take sailing lessons at MIT and visit friends in Maine.

The last time I went sailing was with Frank Wolf, a congressman from Fairfax, Va. I was a general assignment reporter for the now-defunct Fairfax Journal and Rep. Wolf was racing in a regatta on the Potomac River. That was more than 20 years ago. (I would link to the story, but the paper long ago folded and I can’t find online archives anywhere.)

Before that, as a kid, I would occasionally go sailing with my dad on a small neighborhood lake. He had purchased a “build-it yourself” catamaran, which we assembled over several summers. My main memories of that boat and the time spent on it were 1) boats are a lot of work, and 2) “oh, that’s where “swears like a sailor” comes from. Suffice it to say, I learned more about colorful language than I did about tacking ad gybing.

So when I heard that MIT offers a free “learn to sail” program on the Charles River, I figured that would be a nice way to spend a few afternoons and learn the lessons I should have picked up as a kid.

I signed myself and my daughter up for the class. The first lesson was held entirely on land. The teacher explained sailing terms and urged us to learn some basic knots. Glancing over at my daughter, I could tell she had one thought and one thought only: “How much longer until I can get back to my phone?”

For the second class, I came alone. We paired off with other classmates and rigged up our boats. Instructors corrected our mistakes — “No, the line goes through this hole — and don’t call it a rope!” — and we pushed off the dock into the water.

One of the sailing rules is that the skipper should be on the opposite side of the boat from the sail. However, the combination of the small “tech dinghy”, my large body, and a distinct lack of wind made that a challenge. Whichever side of the boat I sat on ended up sinking into the water, causing the sail to swing across the boat. My poor partner — a brilliant young woman enrolled in Harvard Medial School and taking classes at MIT — was half my size and kept trying to help counterbalance my heft.

Eventually, though, we ran the course, tacked around the buoys, and sidled up to the dock. We were sailing.

Day three was much the same, but without partners and more wind. Slicing through the water with only the sound gurgling of the river and the rippling of the wind, it’s easy to see the lure of sailing. Watching a boat in the distance flip over, it’s also easy to see why some stay away.

By the end of the week, it was time for a road trip. Cyn, Sam and I piled into the car and set a northerly course. Faithfully executing the commands of the GPS, we exited Massachusetts, dipped into New Hampshire and headed straight for Maine.

Two friends from Virginia invited us to their Kennebunkport cabin for the day and we were eager to get away for the day.

We exited the highway for “Fletcher Road,” which I pray is named after Jessica Fletcher. (I don’t have the heart to fact-check it.) Winding through country roads and passing cedar-shingled houses, we passed the “World’s oldest and largest electric railway museum,” which I presume, based on the fact that it is a hundred miles from nowhere, is also the least-visited electric railway museum. I wanted to pull in, but we were getting hungry and lobster was on the menu.

Before lunch, though, a walk on the beach was in order.

As we walked around tidal pools, sanderlings pecked at the ground, families (many from Quebec) argued about sunscreen, fishermen (including one guy standing in freezing, nipple-high water) tended to their lines, and small crabs, including a couple hermits, scuttled to and from the water’s edge.

Then we came upon a flat with the most beautiful pattern embedded in the beach:

By this point, my stomach was filing an official protest with the head office and I ruled that it was time for lunch. We headed to the local pier and placed our orders: Seafood chowder, four lobster rolls, steamed clams, chicken tenders, fries, blueberry pie. Maine at its finest.

We drove through the rich part of town — the Bush compound on the point was a hub of activity — and downtown Kennebunkport’s numerous shops and restaurants looked like it could bankrupt me within minutes.

Back at the cottage, we rested and digested. As the sun made its move for the horizon, we topped off our tummies with ice cream and bade farewell. Until next time, Maine.