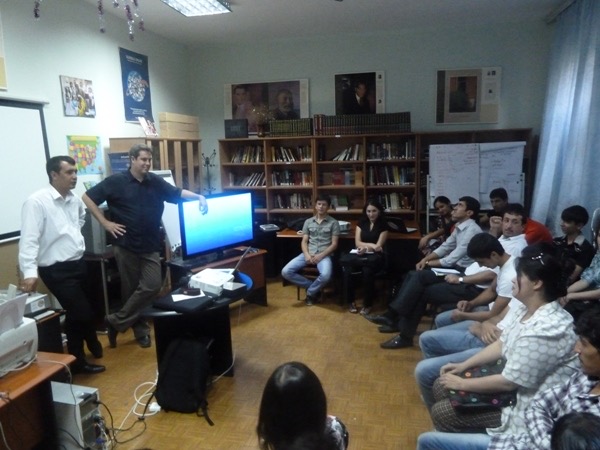 Today was my day at “American Corner,” where locals come to hear an American speak in his/her native tongue. I was asked to discuss social media and its role in creating a civil society, a topic I’m sure a great many American journalists would consider a contradiction in terms.

I began my talk by showing some examples of journalism in which engaging with readers improved the quality of the reporting. This included Sunlight’s live blog, our 180 degree project, projects I worked on at USA TODAY, and projects from the New York Times and other media organizations. The audience seemed suitably swayed that social media could be a tool for good and not just for teens or evil (as if there’s a difference).

Then it was time to take questions.

Question: Do you think the Arab revolution could have happened without social media? Was it the source of the uprisings?

Answer: Yes, I think it could have happened, and no I don’t think it was the source. I think Wikileaks had much more to do with it, but social media certainly accelerated the events and made it easier to share information within the revolutions and with others watching.

Answer: Well, the drivers scare the crap out of me. On the other hand, I love the weather, the big tree-lined boulevards, the beautiful traditional dresses and the friendliness of the people.

Question: I think your President Obama arranged the bin Laden killing to improve his poll numbers and there’s a documentary that says Americans blew up the World Trade Center on 9/11. Why won’t he release the bin Laden photos and why are you spreading your economic problems to the rest of the world? Keep them to yourself.

Ok, no, I didn’t say that. But I was taken aback. I should pause here for a moment to say that Tajikistan is a Muslim country, though not it’s not overt. There are no minarets that I’ve seen; many women show their hair and wear Western clothes; I’ve heard no calls to prayer; plenty of Tajiks drink alcohol; I’ve seen several Tajiks walking their pet dogs, which you’d never see in a country like Saudi Arabia (they consider dogs dirty).

So, while I certainly have no illusions about the view of America around the world, and especially among Muslims, I wasn’t entirely expecting this question, especially at an event for people interested in learning more about America and American culture. Meanwhile, I was mildly surprised by the physiological response I was having: my heart rate went up, my stomach tightened and anger at the idea of us faking 9/11 was rising. But I knew I had to be dispassionate in my response.

Meanwhile, I could sense the discomfort of the State Department PR guy, although to his credit, he didn’t interrupt. So, I thought about the questions and answered thusly:

Answer: First, you are certainly entitled to your opinion, although I don’t think the facts support it. As to killing bin Laden, Obama’s poll numbers are driven by the economy, not bin Laden, as we see from his sagging support. As to the photo, would it make any difference? People who don’t believe will say such a photo is doctored. And it would only serve to inflame people. Furthermore, if bin Laden is alive, all he has to do is say so. He makes videos and tape recordings. Let him make one proving he’s still alive. Regarding 9/11, this just goes to show the increasing need in a world of social media to be savvy about information and how to discern what’s fact from what’s fiction. I can’t convince you that it really happened, but I can, I hope, convince you to think critically about information, propaganda and sources. And as to the economy, it’s not the U.S. spreading economic woes; all of Europe is having problems, too. And if the West stops buying goods, other countries won’t get the income from selling their wares. We’re in a global economy now. It’s not just the U.S. exporting its problems.

She didn’t seem to buy any of it. So I added one more thing: What we are doing, having this debate, is the core of American values. We can say what we think, debate, and argue and that’s all ok.

One Reply to “American Cornered”